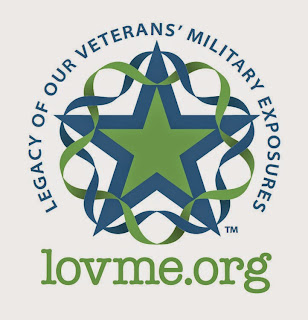 Legacy of Our Veterans Military Exposures (LOVME) was built on the experiences of a widow of a Vietnam veteran exposed to Agent Orange and their daughter. Their daughter, Dee Reyes, has been ill all of her life due to her father’s exposure while serving in the ‘brown water’ Navy from 1966 – 1969.
Sharon L. Perry and her daughter, Dee Reyes founded Agent Orange Legacy in 2007. After years of researching Agent Orange, Sharon and her daughter, Dee, learned Agent Orange was just one of a multitude of military exposures affecting our veterans and their families.
This understanding was the foundation for expanding their existing efforts.
Today our troops are exposed to an onslaught of harmful toxins at a magnitude never before seen. We have learned from the Vietnam war that harmful toxins such as TCDD (Agent Orange) will not only affect the veteran it will also affect the veterans’ descendants for seven (7) generations.
The DOD has been irresponsible and reckless in the disposal of harmful toxins. The problem is so immense that the EPA listed 130 military installations as Superfund sites. Our veterans, left in the dark, about the chemicals many have been exposed to and their health effects. During the Cold War Era our veterans, many without their knowledge, were exposed to chemical and biological warfare materials such as nerve agents, blister agents, hallucinogens and biological agent testing.
Americans are also affected by these U.S. military installations added to the Superfund site, by the manufacture and testing of war time weapons such as Agent Orange along with other biological and chemical warfare agents. We are all affected when war time technology is transferred to the commercial sector. Nuclear power plants and Genetically Modified crops resistant to Roundup (a herbicide) are a couple of examples of war time technology being transferred commercially.
Not only are our veterans and their offspring being poisoned so are all Americans. We have an epidemic of cancers, autoimmune diseases, learning disabilities in our children such as Autism (1 in 160) and ADHD, food sensitivities and food intolerance to food additives such as gluten and soy.
As Americans we need to reassess how our way of life affects the world we live in. We can no longer afford to be wasteful and turn the other cheek. There are many changes we can make in order to insure our children’s future.
LOVME asks all Americans to begin this journey and help us to protect our veteran’s children because protecting our veterans’ children will also protect your children.
You can visit our website at this link>>>http://lovme.org/

SIGN THE PETITION AND LEARN MORE AT THIS LINK http://agentorangelegacy.blogspot.com/2013/05/children-center-petition.html