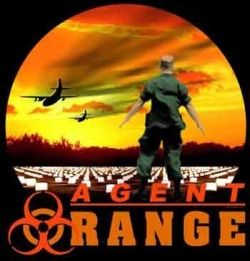 The chemicals washed into rivers and streams and eventually into the bed of the South China Sea.

"During the Vietnam War, the coastline, especially in the harbors and within the thirty fathom curve was a busy place, with military and civilian shipping constantly entering and leaving the area in support of the war effort," the complaint states. "Whenever ships anchored, the anchoring evolution would disturb the shallow seabed and churn up the bottom. Weighing anchor actually pulled up a small portion of the bottom. The cavitation of military ships moving along the coast line, especially within the ten fathom curve, at high speeds, further impinged on the sea bottom. This caused the Agent Orange to constantly rise to the surface."

After churning up the Agent Orange while traversing and anchoring offshore, unsophisticated methods of turning saltwater into potable water intensified the chemical, furthering their exposure, the veterans claim.