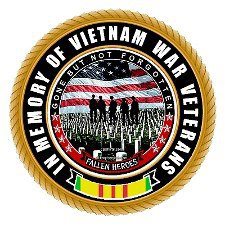 "What we are"” said Henry Snyder, a Vietnam War veteran, “is a memorial to the Agent Orange victims.”

The 30 orange quilts feature blocks with soldiers’ names, rank, and other information that the respective family shares with the Snyders. It is a vivid commemoration of love for those who can be added to the long list of dead in the aftermath of the Vietnam War. “We inherited it from the lady who started it, Jennie LeFevre, who passed away in 2004,” said Sheila.

So, just what was Agent Orange, really?

According to the Snyders’ literature, Agent Orange was the code name given by servicemen for an herbicide developed for the military to be used in tropical climates. The product’s purpose was to deny enemy cover and concealment in dense terrain by defoliating trees and shrubbery where the enemy would hide.

MY HUSBAND IS SUFFERING FROM AGENT ORANGE, HIS NAME BELONGS ON THAT QUILT AS WELL