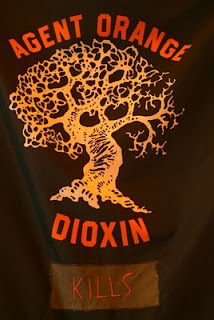 Makers of Agent Orange followed formula dictated by U.S. government:  In 1965, according to another memo that's became public in federal court documents, Dow warned Monsanto and other Agent Orange makers that industry
“had to resolve the (dioxin) problem before the government found out.”Monsanto and other companies ...
<http://www.kansascity.com/2013/07/22/4360017/makers-of-agent-orange-followed.html>

The affects of Agent Orange in Vietnam are felt through the generations:  The Da Nang Association for Victims of Agent Orange/Dioxin says that 5,000 people - including more than 1,400 children - around the city suffer from mental and physical disabilities from dioxin exposure, a legacy the U.S.
military's use of Agent Orange ...
<http://www.sacbee.com/2013/07/22/5586792/the-affects-of-agent-orange-in.html>

4 decades after war ended, Agent Orange still ravaging Vietnamese:  Le Thi Thu, 42, and her daughter, Nguyen Thi Ly, 11, live in a village south of Da Nang, Vietnam. They are second and third generation victims of dioxin exposure, the result of the U.S. military's use of Agent Orange and
other herbicides during the ...
<http://www.charlotteobserver.com/2013/07/22/4181888/4-decades-after-war-ended-agent.html>


As parents die, Vietnamese worry who'll care for Agent Orange disabled:  We foresee this becoming a serious issue, which is why we need more foreign funding,” said Nguyen Thi Hien, the director of the Da Nang Association for Victims of Agent Orange/Dioxin. Vietnam, where once-lush jungles in the Central Highlands remain ...
<http://www.islandpacket.com/2013/07/22/2589502/as-parents-die-vietnamese-worry.html>

Obama: Include Disability in Strategic Partnership Talks with Vietnam's President:  The effects of dioxin, a contaminant in Agent Orange, remain a controversial subject. But discussion of the Agent Orange legacy has matured in recent years from a topic of polarized views toward active bilateral cooperation; from poor understanding to ...
<http://www.huffingtonpost.com/charles-bailey/vietnam-presidents-visit-_b_3640177.html>
Posted by dee at 2:10 PM