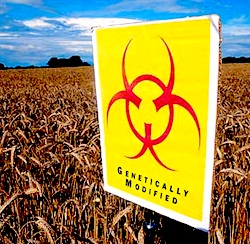 
If the Federal government had approved Monsanto's and Dow Chemical's new genetically modified crops, the Center for Food Safety said it would file suit. The Center for Food Safety has won several lawsuits against the government. USDA is supposed to issue an EIS (environmental impact statement) in the event an government regulation, like approving a new GMO crop, may potentially affect man's natural environment.

The herbicide resistant crops, proposed by Dow, (soybean, cotton and corn crops) contain a substance ( 2,4-D, or 2,4-Dichlorophenoxyacetic acid). This is found Agent Orange. Agent Orange is cited as a cause for a neurological and other ailments suffered by those who came in contact with it during and after the Vietnam War.

The USDA has refused to approve the new GMO crops until 2015 at the earliest. USDA says it has to conduct environmental impact statements (EIS) before it can approve GMO crops that potentially affect the environment and quality of life for the people who live in it.

European countries, and Asia, broadly prohibit GMO crops. Fears of GMOs effect on humans and the affect GMO cultivated crops have on organic foods, prices and farmers were concerns voiced by American people to the Obama Administration particularly in the past few months as Congress passed the Monsanto Protection Act.

Monsanto and Dow executives were surprised at USDA's decision to disallow conversation about the crops until 2015.

Currently, GMO foods do not require labeling. American consumers can assume that when purchasing canola oil, corn and soy, that they're likely purchasing GMO unless the brand specifically states "organic."