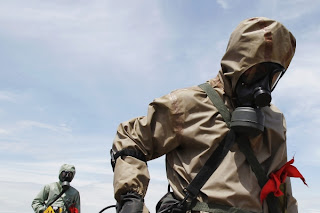 
(Reuters Health) - Men who were exposed to Agent Orange chemicals used during the Vietnam War are at higher risk for life-threatening prostate cancer than unexposed veterans, researchers have found.

In the new study, men who served where Agent Orange aka Dioxin was being used, on average were diagnosed five years earlier than men who did not serve.

Urologist Dr. Mark Garzotto, who worked on the study at the Portland Veterans Affairs Medical Center in Oregon, said "This is a very, very strong predictor of lethal cancer,".

Agent Orange - named after the giant orange drums in which the chemicals were stored - was used by the U.S. military to destroy foliage, in Vietnam. The herbicide was often contaminated with a type of dioxin, a potently carcinogenic chemical.

Previous research studies also suggest, U.S. veterans who served where Agent Orange was used are at an increased risk of lymphoma and certain other cancers, including prostate cancer.

In the new study, medical records belonging to 2,720 veterans that were referred to the Portland VA for a prostate biopsy. Apoximetly, one in thirteen of those men had been exposed to Agent Orange during the Vietnam War.

One third of all men in the study were diagnosed with prostate cancer, about half of which were high-grade cancers, aggressive and fast-growing.

The study team reported Monday in the journal Cancer, that the herbicide Agent Orange, was tied to a 75 percent higher risk of  a diagnosis of  aggressive prostate cancer.

But, he added, as long as men are getting into the VA system and getting regular evaluations and treatment for cancer, Agent Orange exposure "is not a death sentence by any means."

source
source
Posted by Dee Reyes at 12:37 AM