Vietnam veterans who were exposed to the defoliate Agent Orange are 49% more likely than nonexposed veterans to be diagnosed with prostate cancer. That's according to results from one of the largest studies to date examining that association.

The study was presented here at the 2011 Genitourinary Cancers Symposium, and adds to a mounting body of evidence implicating the defoliate in the development of prostate cancer.

"Even when numerous other risk factors were accounted for, exposure to Agent Orange increased risk significantly," principal author Nathan Ansbaugh, MPH, told Medscape Medical News in an interview. "In our study it carried just as much risk as positive family history and even more risk than age," he said. 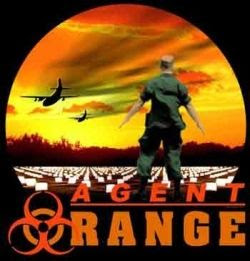 Why is Agent Orange associated with the development of prostate cancer? "It's not at all clear," said Mr. Ansbaugh, "since many men were exposed and haven't developed prostate cancer. We think there are probably some host factors at work here. It could be that exposure to Agent Orange functions as more of a promoter, a trigger mechanism for prostate cancer."

He added that "with ever more information becoming available on the human genome, I wouldn't be surprised if we find out that there are certain genetic traits or genetic translocations that are necessary to interact with Agent Orange and trigger the development of prostate cancer."
Posted by dee at 9:38 AM

I'm not surprised in the least that prostate cancer decided to show up in me....it goes well with the other items....larynx cancer, x2, diabetes, skin cancer. I always considered myself a healthy man throughout my life and hospital visits were limited to conditions for the normal reasons. All my illnesses decided to show up at the same time, 40+ years after I left Nam.

Strange but that is how it happened to my husband - all at once. Now he is gone because of it in 2005.

Just remembered my account was in my wifes name, Judith. So, the prostate cancer, larynx cancer, skin cancer and diabetes belongs to me, Kennie Thompson....aka pipemandoo. Guess I'll have to make another account.