A top White House aide assigned to review problems at the Department of Veterans Affairs is going to Phoenix, where CNN reported that fraudulent records -- including secret lists -- covered up allegedly deadly waiting periods for veterans to get care.

White House spokesman Jay Carney told reporters on Tuesday that Rob Nabors, the deputy chief of staff helping the review by Veterans Affairs Secretary Eric Shinseki, will head to Phoenix on Wednesday night to interview the interim director of the VA office and visit the facility.


The American Legion is monitoring alleged VA mismanagement within the 16 states highlighted below. #notjustphoenix 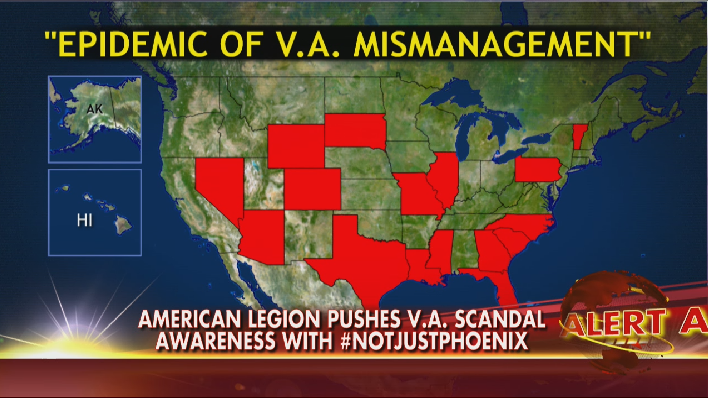 The Department of Veterans Affairs said it has expanded an investigation of a Phoenix hospital where a whistleblower alleges that as many as 40 veterans died amid lengthy waits for appointments.

The VA inspector general's office first received what it termed credible complaints about the Phoenix VA Health Care System from a hotline at the end of 2013, said inspector-general spokeswoman Catherine Gromek, and the office launched a review in January. She declined to identify who made the complaints, and added that the inspector general requires only one credible allegation to begin an investigation.

Dan Griffiths is a Vietnam veteran. He believes much of his current ailments stem from exposure to Agent Orange. Throughout the years, he's visited the Lexington VA Medical Center for treatment.

On a national level, veteran's affairs hospital have been under fire after multiple allegations that officials have covered up reports of veterans waiting for months for health care. Those delays may have led to dozens of death.

Robert Petzel, undersecretary for health at the Veterans Affairs Department, resigned on Friday, one day after testifying before a Senate panel.
Petzel, who had been slated to retire later this year, stepped down in the wake of allegations that some VA facilities kept secret wait lists to cover up how long veterans were kept waiting to receive care.

Want to Fix VA Health Care? Get Rid of It

On Thursday VA Secretary Eric Shinseki was grilled by members of Congress about significant and perhaps deadly delays in health care for America’s veterans. Some on Capitol Hill, and some leaders of veterans organizations, have demanded his resignation.
But the problem with the VA is not its boss. It doesn’t matter whether Eric Shinseki stays or goes, or whether he’s done a good job during his five-year tenure in trying to address the VA’s many long-term issues in delivering quality care. The problem is the VA. The medical component of the Department of Veterans Affairs needs to be abolished. We need to shut the doors of the thousands of medical facilities around the country that are failing to serve our veterans.

Veterans Affairs In Crisis: 10 Questions For VA Secretary Eric Shinseki
With the scandal growing, Concerned Veterans for America (CVA) and the American Legion have called for Shinseki’s resignation — not out of hostility toward the secretary, but because we believe replacing the department’s top leader will send a clear message that no one should be above accountability. And Shinseki has a lot to answer for. In Phoenix, a VA whistleblower alleges that at least 40 veterans died while on a secret “interim” wait list for medical appointments, and there are credible allegations that VA employees attempted to destroy evidence of the secret list. Similar revelations of falsified data and corrupt record-keeping have arisen in Colorado, Texas and Wyoming.

Internal memos show the VA has been playing whack a mole for at least six years with employees who use dozens of different scheduling tricks to hide substantial delays in health care for America’s veterans. And whenever the VA tries to stop its staffers from “gaming the system,” the staffers come up with new techniques.
Whistleblowers around the country are now accusing the VA of hiding a backlog in patient care with bookkeeping tricks, and a former doctor at a VA facility in Arizona says the delays may have contributed to the deaths of 40 patients.

Employees at the embattled Phoenix office of the Department of Veterans Affairs have been making millions in higher-than-average salaries and bonuses, according to federal records reviewed by Fox News.