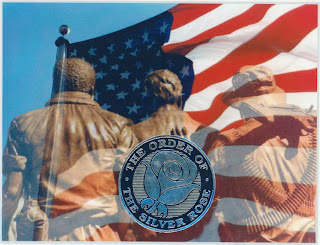 The Silver Rose is presented to Vietnam War veterans exposed to Agent Orange, a chemical defoliant used by American forces during the war in Vietnam. Today, the Department of Veterans Affairs (VA) recognizes more than 40 cancers and illnesses, including Type 2 Diabetes, as being Agent Orange related. In addition, thousands of Vietnam War veterans have died from illnesses connected to Agent Orange exposure, yet these veterans are not recognized by the U.S. government for those illnesses, despite the war-related origin, said Ken Thorp, one of the ceremony’s organizers.

The Silver Rose is awarded to Vietnam veterans exposed to Agent Orange dioxins in an effort to give them the honor and recognition they deserve, said Thorp. “While victims of other combat injuries receive the Purple Heart, the soldiers who were exposed to Agent Orange and have suffered the medical consequences of that exposure receive no recognition from the government. The Silver Rose will continue to be presented to all eligible Vietnam War veterans or their surviving family members until our government decides to honor these victims,” he added.

In addition to the award, one of the missions of the Legion of the Silver Rose is to inform surviving Vietnam veterans of the importance of yearly medical exams to determine the presence and early detection of potential Agent Orange-related illnesses.

How would a Vietnam Vet go about receiving this medal? My brother is currently fighting for his life, with Multiple Myeloma. Thanks for any help you can give me.

My brother is a Vietnam Vet, currently fighting for his life with multiple myeloma. What is the procedure for getting him this award? Thank you.
Deb Champagne

As a VN veteran who is service connected (Prostate Cancer, DM2, Skin Cancer and Esophageal Cancer) I'm very happy that the fight is still ongoing - don't give up!

It looks as if the "Silver Rose" may again be available. I would be interested in making application please let me know how i may go about it.

I am a disabled Vietnam vet (Recon 9th and 25th INF DIV 1970) I have tried to contact the web site but no reply. Very interested in hearing about current activity about the Silver Rose.

My husband, Bob Priore served with the 91st bomber wing in Guam, stationed at Andersen Air Force Base during 1966-1967. He serviced the trucks that brought the drums of AO to the planes for their runs to Viet Nam for spraying. His coveralls were often soaked with the AO that leaked from the drums. The perimeter of the air field was also sprayed with AO as well. He now suffers from advanced Parkinson's Disease. He has been denied benefits because he wasn't "boots on the ground" in Viet Nam. This is a travesty and a tragedy for him, our family and others in the same situation. My father also died from mesothelioma, a cancer caused by the asbestos he was exposed to as a ship builder at the Charlestown Navy Yard in Boston during WWII - also denied by the government. Why can't something be done???