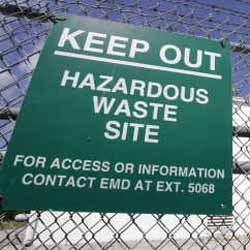 A bipartisan group of U.S. senators and congressmen is urging the Centers for Disease Control to complete a new, comprehensive report on the health effects of toxic tap water at the Camp Lejeune Marine base.

The lawmakers also want the agency to investigate whether people were exposed to airborne toxins inside buildings after contaminated wells at the North Carolina base were closed in 1985. And they asked the agency to look into the feasibility of a "cancer incidence study" for Lejeune.

As many as 1 million Marines, dependents and civilian workers are believed to have been exposed to trichloroethylene (TCE), tetrachloroethylene (PCE), benzene and other toxic chemicals that leeched into ground water from a poorly maintained fuel depot, dumping and an off-base dry cleaner. Last year, President Barack Obama signed a law providing medical care and screening for those exposed between 1957 and 1987. But Ensminger and others fear that cutoff date is too early