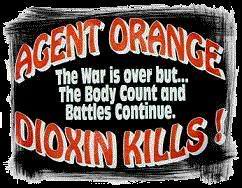 Neither of these Marines could have foreseen that their paths would cross again stateside. Neither man at their time of service was aware that the liquid stored in those barrels was Agent Orange. Complicating matters, while the VA has admitted that Agent Orange can cause devastating diseases, including the diabetes suffered by these two ex-Marines, the agency has mandated that veterans must either have served in Vietnam or have had direct exposure to Agent Orange to claim benefits--a difficult thing to prove. Given that neither Cintron nor Hernandez had ever served in Vietnam, their cases rested upon the direct exposure connection. Somehow, contrary to the government's assertion, Agent Orange did end up in storage barrels in Subic Bay, Philippines. But how did it get there, who knew about it, and what could be done to prove it to the government?  The veterans had their work cut out for them.  Without new and material evidence that placed the storage of Agent Orange in Subic Bay during their service, the two cases were closed for good.


The burden of proving exposure to Agent Orange lies with the victim. Though lay testimony is gaining acceptance before the VA--particularly in cases of combat veterans or victims of military sexual trauma--a victim's statement alone is generally not enough to prove the occurrence of an incident in service. Attorneys who advocate for veterans often rely upon the detective work of their clients to investigate their past service and uncover new and material evidence that can be used to reopen their cases. That's where the power of the buddy network comes into play.

The cases of Cintron and Hernandez shared three important circumstances of service--time, duty, and location. To find in favor of one veteran in terms of direct exposure would be to find in favor of the other, given that the two veterans were similarly situated individuals. Both veterans conceded to the Board that, at the time of their service, they did not know the contents of the barrels with an orange stripe contained Agent Orange. It was only later that each read an online VA fact sheet which indicated that barrels such as those they had witnessed did contain Agent Orange. And, thus, the investigation began. These two men who were there for each other as Marines had come full circle to support each other as veterans decades later.

**We are not affiliated with the law firm that is the source of this article. We do not offer recommendations.
Posted by dee at 11:08 AM

I have just recently pit in my claim re Agent orange. Two of my sons one from my first marriage and one from my second marriage have spinal bifidea occulta. Both children were conceived after my tour with the 4th Infantry Division in Nam where we walked in areas deforested with Agent Orange, slept in those areas and cooked and are food there. We got lots of puncture wounds from walking through the dead foliage. And yet, when a claim is submitted, the Veteran has to prove the case. This treatment of returning vets is shameful and demonstrates that this country has no love for its warriors. When I think that my kids and grand kids may have to pay for my service in Nam, it makes me wish I didn't make it back alive. Vets are treated like mushrooms. They are kept in the dark and fed lots of fertilizer. One or two men or women fighting a a multi-million dollar organization. Nothing like a fair fight.