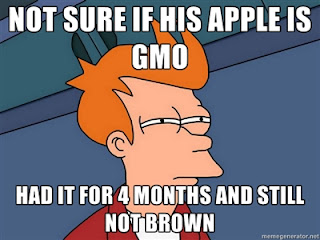 The Arctic Apple may be an apple that never browns when cut or exposed to the air for too long. But there is just something that gets into people when genetic engineering of food is involved. It seems that people are still not that comfortable having genetically modified foods into their table, at least not something that they have direct knowledge of.

While most Americans have been eating genetically modified foods in one way or another from the different processed food products found in the supermarket aisles since the 90’s, the Arctic Apple may be one of the first genetically engineered fruits that people may actually directly eat.

continue learning
Posted by dee at 10:34 AM