“I thought it was appropriate to leave the comments in there by vets who talked about coming back and being spat upon and that it wasn’t a military-run war. The politicians controlled it, not military tactics or strategists. I think that was important to say, because of how it affected the outcome,” Odell said.

In the film, he speaks about how warning labels were removed from chemical drums that the contents were dangerous to humans.

“He has documents that showed that the chemicals should not have been used,” Famie said.

“Nobody wanted to touch the POW or the Agent Orange issues so we had to bring them to people’s attention ourselves,” Spooner said. “I remember when we started (VVA) Chapter 9.

We had so many guys in their 30s dying of these weird cancers. They were healthy in their 20s and passing away a decade later.

We had close to 2,000 members back then. It seemed like someone was passing away once a month from our chapter alone.” 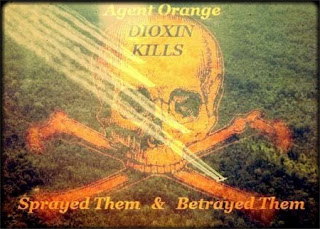